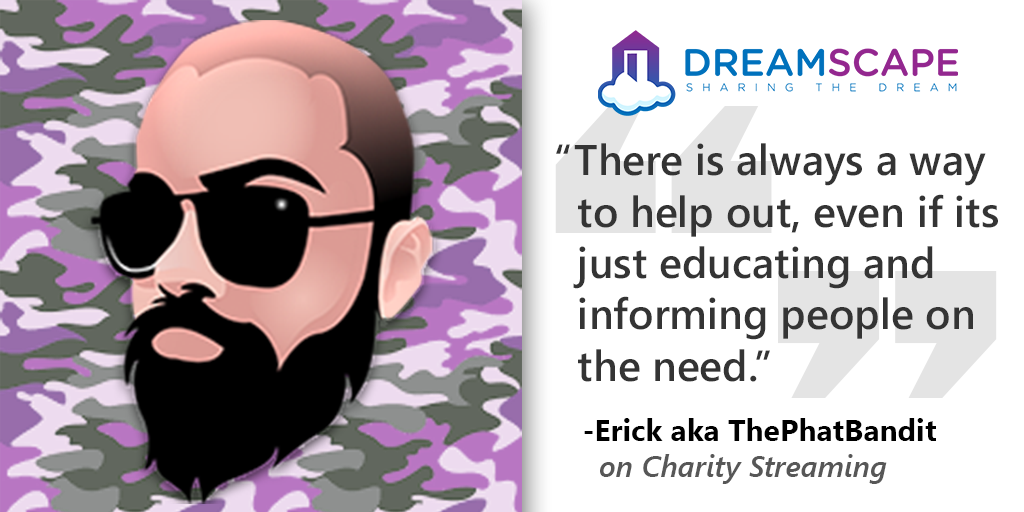 Erick, also known as ThePhatBandit to his Twitch community, is teaming up with the Dreamscape Foundation for a Charity Stream event like never before. Erick first got into streaming on Twitch through his longtime hobby of gaming. As a regular gamer, he found out about Twitch and started watching other streamers and personalities. After a while, he realized he had the resources to create a channel of his own, so why not? To him, it was more of a way to play games with his friends and connect with a broader community. His only goal was to have fun, make people laugh, and make even more friends.

An Open Community that Became Family

ThePhatBandit Twitch Channel is open to everyone looking to have a good time and interact with new people. Whether you are a longtime viewer or just checking it out for the first time, he is quick to invite you to join in and play along with him online. Erick strives just to be himself and network with people around the world he would never have met otherwise. Aside from just playing games, he is very vocal with his community. They talk a lot and consider it like therapy, talking about good days, bad days, whatever, and just hashing things out. When I asked him what he enjoyed most about streaming, he replied, “The comradely and the relationships we built just through our community and other streamers’ communities.” He went on to explain people had tuned in to watch the stream, never knowing them before, and eventually became friends he talks to daily. To Erick, Twitch is a place for people to have fun, play the games they love, and make new friends that’ll last a lifetime.

Cut from the same cloth, he has been a longtime believer in charity work and helping those in need. So much so, his full-time job is with a nonprofit organization we are proud to call a neighbor here in Naples, FL. The Friends of Foster Children Forever is an organization dedicated to fulfilling the needs of every child who enters or is at-risk of entering the foster care system throughout Collier County. Their primary focus for the children is to help them reach their full potential in life through education and enrichment opportunities, as well as simply enjoying being a kid. One of Erick’s favorite outreach events was when they took a large group of 40+ to a theme park. He remembers the look of pure happiness on each of their faces. Not because it was just another enjoyable day to a group of kids, but he knew for some it was their first time at a theme park and for others, their first time leaving their home town. Erick loves what he does and is excited to be able to combine his passion with his channel as a way to give back and help even more people.

Now, as I mentioned, this is a charity stream event like never before for Dreamscape! You may be wondering what is so different this time around? Well, ThePhatBandit has decided to step things up a bit! Rather than streaming for a day or 2, he will be turning this charity stream into a month-long Marathon Event!! Beginning on November 15th and ending on December 15th, Erick will be raising funds to help with our holiday efforts. All proceeds will be used to support various children and families in need throughout the Holiday Season. From adopting families to donating to shelters and foster homes alike. As always, we will be giving thanks to our generous supporters with thank you gifts and entries into our raffle drawings. The awards will be on a tier-based system, ranging from t-shirts and steam keys to Funko Pops and your favorite Call of Duty collectible character figures. Not stopping there, we will send a couple of lucky winners away with our raffle prizes of various Amazon gift cards, with the grand prize being $100! See our prize chart here: 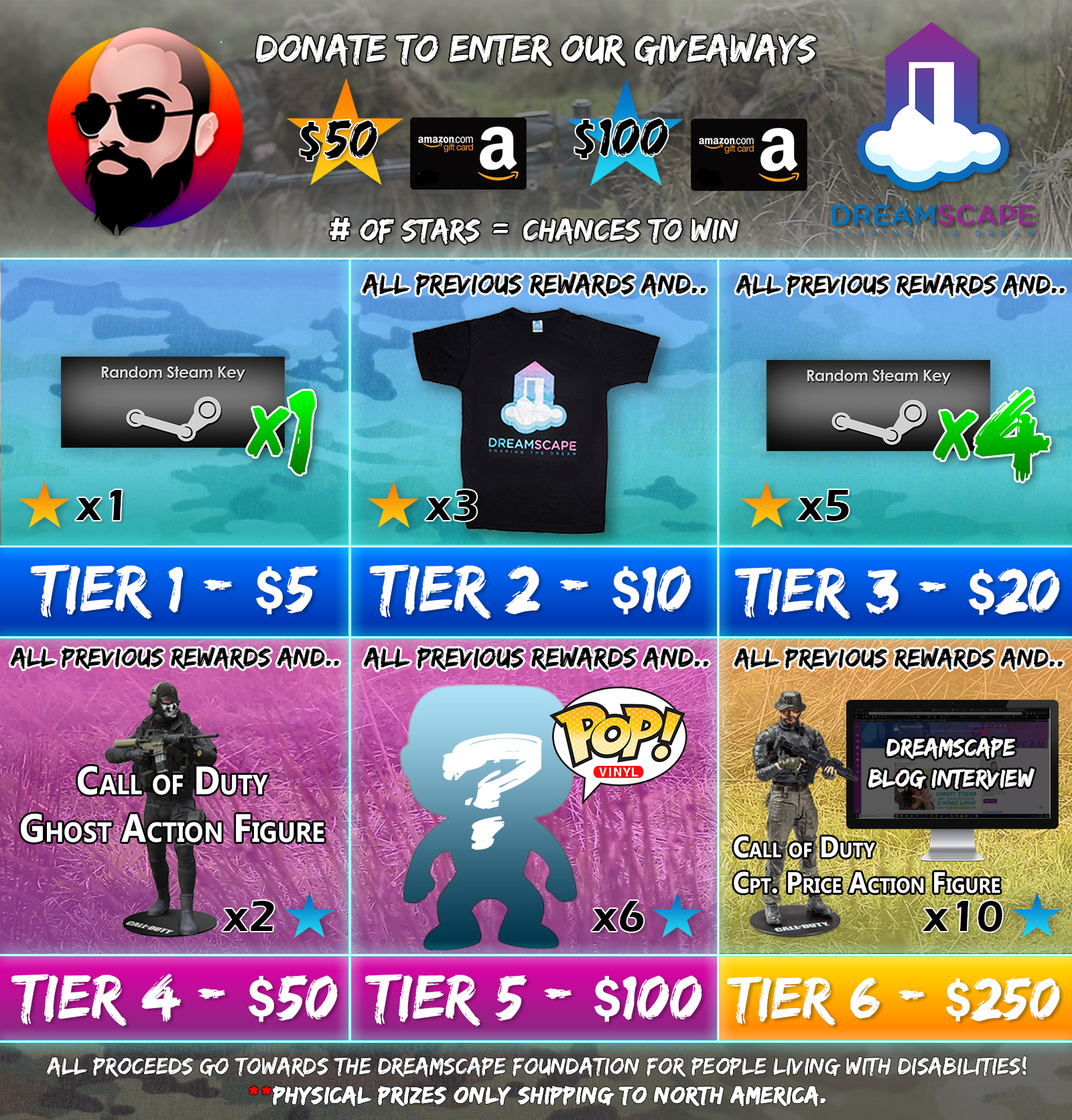 All donations are welcome and beyond appreciated, but are never required! Erick encourages everyone to join in, no matter his or her ability to support. His community is a place for everyone to have fun and join in on the games and conversations. He will be playing various video games, including the new Call of Duty Modern Warfare! Additionally, he will be opening up several discussions around the charity, which we are supporting, and give you his honest thoughts on the matter. As Erick mentioned during his interview, “there is always a way to help out, even if it’s just educating and informing people on a need.” To keep up with Erick and join in his community, we encourage everyone to follow his Twitch Channel, Twitter, Instagram, and to check out his organization, The Friends of Foster Children Forever! « PreviousNext »