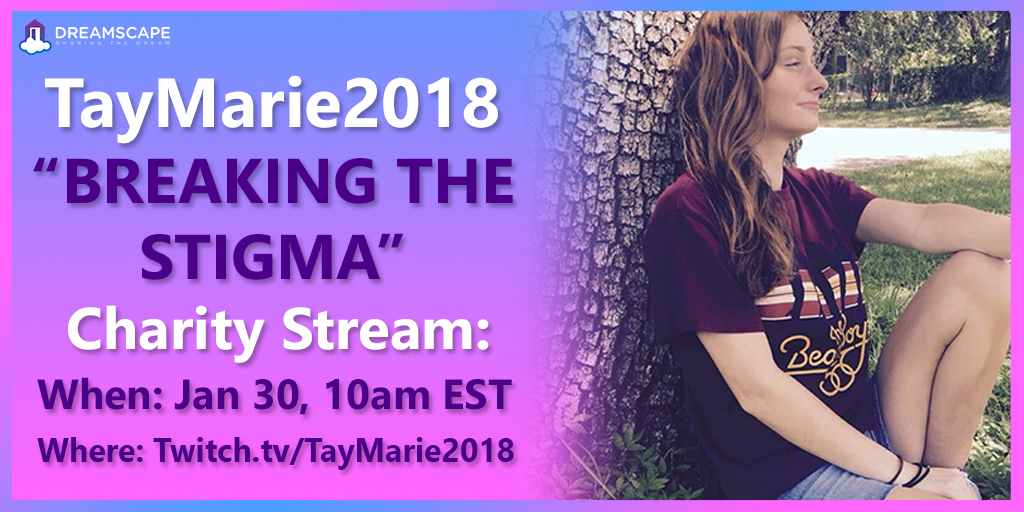 “I will show you the best way I can possibly tell you. Squint. Squint, but to the point where your eyes are almost shut. Tell me what you see,” Taylor Muske explained. Muske, better known as TayMarie2018, is a visually impaired streamer who refuses to let her disability hold her back. “I’m blind, and I’m trying to show other people that it doesn’t matter what setback you may have. You can still do what you want,” Muske stated.

“Though she be but little, she is fierce!” – William Shakespeare

Taylor was diagnosed with Retinopathy of Prematurity (ROP) and bilateral congenital cataracts at birth, which resulted from being a premature baby. “I was born four months premature and I was one pound and eight ounces,” Muske said. At that point, the baby’s lungs aren’t developed, so they have to be given oxygen. “The high amount of oxygen that they are given either damages your optic nerves or it damages your hearing. It can go either way, and I know people who have both actually,” she continued.

A Smile is Contagious

Today Taylor uses her platform to raise awareness for people with disabilities, but that wasn’t why she started streaming.  “I started streaming at the end of 2019 as a way for another income because I am visually impaired myself, and finding a job is horrendous,” Muske described. “It is almost impossible, so I decided to stream and I fell in love with it.” For TayMarie2018, her love for streaming comes from being able to make people laugh and spending time letting loose with friends.

Muske is here to break the stigma that blind people can’t play video games. “I might not be good at them, but I can still play,” she laughed. “And make fun of myself for not being good in the process.” Taylor gave some insight into her tips and tricks for playing games while being visually impaired. “Most games I actually play auditorily, like I just play with my ears,” she described. “I have a 27.5-inch monitor for my main monitor, so it’s not small. For [first-person shooter] FPS games I use my ears, and I try to strictly play games that are auditorily focused.”

When Taylor is not streaming, she still continues to rewrite the narrative of what someone who is visually impaired can or cannot do. “I race 420 sailboats. I started that when I was fifteen, so six years ago,” Muske shared. “I steer and someone else is my eyes.” TayMarie2018 does not let her disability dictate her life.  “Transportation is always something that is in the back of my mind because I cannot drive,” Muske explained. “I feel bad about having to rely on others for transportation, and my friends know that they are not going to be there 100% of the time that I need a ride. I had to learn how to take the bus.”

TayMarie2018 has chosen to team up with Dreamscape Foundation for her first Charity Stream this Saturday, January 30, starting at 10 am EST. Being visually impaired herself, Dreamscape Foundation’s Mission really hit home for Muske. For her 12-hour Charity Stream, Taylor will be playing some of her favorite games including Among Us, Dead by Daylight and Call of Duty.  In addition to the games, Taylor said to expect “a lot of shenanigans. A lot of them.”   « PreviousNext »