In 2018, Hannibal YMCA’s Group Fitness & Aquatics Coordinator reached out to Dreamscape Foundation seeking guidance and assistance on how to make their YMCA facility – and its programs – more accessible. The effort was inspired by one of their wheelchair-bound members, Audrey Pickett, who wanted to be more involved but was facing accessibility challenges at their facility.

Dreamscape Foundation immediately responded, and has since been providing advice on accessibility options and resources, as well as contributing funds to support the programs and equipment that would make accessibility possible.

The collaboration sparked a movement; one driven by Audrey’s determination to make the world more accessible for herself and others. She experienced firsthand how the fitness equipment and programs at the YMCA can improve her life, her personal strength, and her mobility.

Beyond that, she found a sense of community at the YMCA that accepted her, encouraged her, and offered opportunities to be involved with the organization. She wanted other individuals in her community with disabilities to have these same opportunities. Thus, Dreamscape Foundation remained in contact and continued to support her in these efforts.

Below is an update on her story.

From Student to Instructor: Audrey is an Invaluable Asset to the YMCA

In addition to her attending her physical training sessions, Audrey is now an instructor teaching Pound classes at the same YMCA that she helped evolve to accommodate accessibility needs. The class is a high energy cardio, conditioning, and strength training program that utilizes special drumsticks called “Ripstix.” The exercise uses these sticks to combine rhythmic beats with Pilates- and Yoga-inspired movements, and is easily modified to suit participant’s unique level of abilities.

When asked about how the last two years have impacted her, she said, “It’s made me a better person, and it’s made me stronger. I realized that I can do more than I thought I could do.”

Audrey has always enjoyed teaching and has desired to do so in some capacity. However, being a Pound instructor at the YMCA is an opportunity she never imagined would be a reality when this all began. She attributes her growth to both her dedicated practice and effort as well as the support of the people around her.

Beyond teaching, Audrey is also an active YMCA volunteer. Recently, she helped assemble food boxes for their USDA-funded food program called Meals On The Go. The program provides one week’s worth of food per box for youth ages 18 years and younger.

Audrey continues to serve as a huge driver for accessibility at the YMCA. Her voice has led to several changes, including adapting the handicap restroom to be more accessible.

“Audrey mentioned that the stall was very tight, and she really couldn’t get in there, turn her chair and shut the door,” said Hannibal YMCA CEO Eric Abts. “And we appreciated that perspective. We moved on it pretty quickly, and got it switched over. Now it’s better for everyone.”

Looking forward, Audrey aspires to continue to grow, expanding her capabilities as a Pound instructor and possibly return to school to expand her education.

“I wanted to say we’re extremely thankful to Dreamscape Foundation for making this possible,” Eric said. “You guys have been wonderful. We’ve had this relationship with Dreamscape for well over a year now and it’s just been a blessing.” 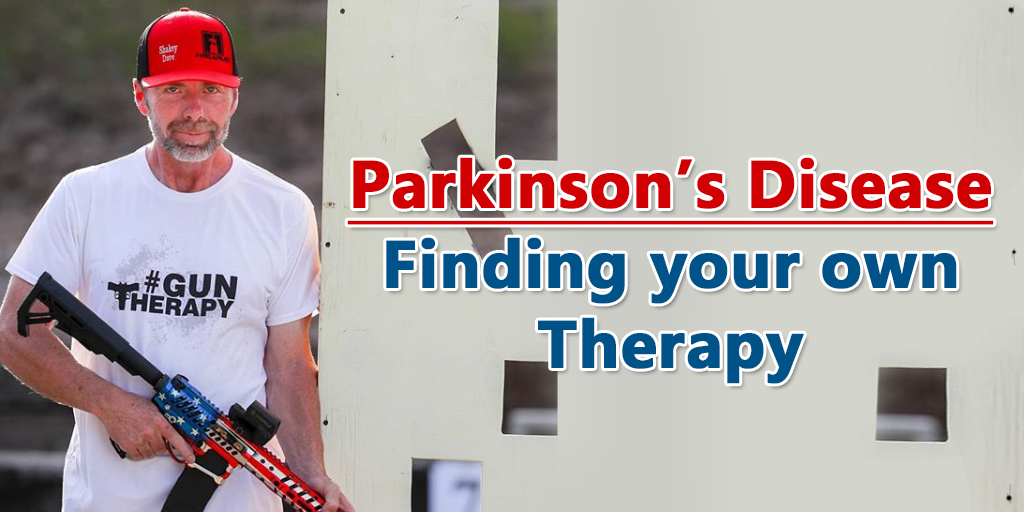 David Smith is a strong believer that “guns are not all bad, they are just a tool.” David has been around guns his whole life and was taught proper usage and safety at a young age. Going to the range and competing in competitions was always something he loved and knew he would do the rest of his life. But one day, at age 38, David was diagnosed with Parkinson’s disease and his life changed forever.

What is Parkinson’s Disease and its Symptoms?

Parkinson’s disease is a neurodegenerative disorder that affects dopamine-producing neurons in a specific area of the brain known as the substantia nigra. This results in a progressive loss of movement and coordination since dopamine is used by the body to pass signals between neurons. Essentially, the brain’s delivery system for muscle movement signals is shut down or extremely limited. Over time, the symptoms worsen, as more and more dopamine-producing neurons die until the individual is incapable of controlling his or her movements. Typically, this progression is slow, acting over a duration of time, but for some can progress at a much quicker rate.   Symptoms of Parkinson’s and the extent of them can vary from person to person. The most common symptoms consistent with the disease are as follows: Currently, there is no cure for Parkinson’s disease, but a number of treatment options are available to assist in minimizing or easing symptoms. The most common treatments are a combination of medications alongside physical therapy, occupational therapy, and speech therapy. By combining these three therapy options, individuals can regain physical strength and ability, improve on proper motor functions, as well as correct slurred or mumbled speech.

David was only 38 years old at the time he was diagnosed with Parkinson’s disease and since then has been doing all he can to fight back and regain his independence. In the beginning, David was confined to a handicap scooter to help him get around. He reported he was in the scooter because he could walk to his mailbox outside but any further and he would have a frozen episode and become unable to move. As time went on the shakes increased and David began looking into other forms of treatment. Just as most individuals affected by the disease, he was prescribed a set of medications to help him with his various symptoms. But after some time, he realized the side effects of the meds were worse than his symptoms. David wanted to find a way that would help him improve and not just supplement with medication. He read about a study on dance and the effects it has on helping with Parkinson’s. When attending the study, they had him listen to lectures about the science behind it while others got to dance. What stuck with him the most from the lecture was “neuroplasticity”. Neuroplasticity is the brain’s ability to reorganize itself by forming new neural connections throughout life. Essentially, it allows neurons in the brain to pick up the slack for damaged or diseased cells to help the body adapt and heal itself. After learning more about this, David immediately signed up for the dance portion of the study. But unfortunately, he did not meet the physical and cognitive measurement requirements and had to drop out. As David says, “the only thing left for me to do was shoot”. David went to talk to some people at the NRA and realized when he went to aim his gun, the shaking stopped. Since then it’s all he does. David claims the shooting helps him not only with the shaking but also with his hand-eye coordination and keeping him physically active. Additionally, “Parkinson’s has an effect on memory, and I know I’m not as sharp as I used to be”, says David. He further explained, “when shooting in competitions and courses, I need to take out 40+ targets as quickly as possible. So remembering where the targets are strengthening my brain, physical ability, and clarity as well as my self-confidence.” He never expected it to go this far, he originally started just to help himself and to try to enjoy his life. In an attempt to get himself better and to minimize his medication, David began using “Gun Therapy” daily, to help him improve his ability and to fight back against Parkinson’s. The way he saw it, by taking in synthetic dopamine it only synthetically fixes that broken pathway and in his belief the pathway will never rebuild itself or improve. Now, David spends 90% of his day shooting, the only thing that helps him truly feel himself again and improve his condition. “When I measured my shakes at 25 yards out, my shots would travel 6 feet of shake from my aim, but when I go to pull the trigger my arm steadies and I am on target”, David said. Before Gun Therapy, he was taking roughly 25 pills a day and last year, he successfully got himself down to only 6! An incredible accomplishment, only to be topped by his continued ability to win a number of shooting competitions, despite his condition.

What’s next for David?

David has many goals in mind. He wants to spread the word of Gun Therapy, as well as spread awareness to help people understand not only Parkinson’s but all diseases/conditions impacting people around the world. However, next on David’s agenda is competing in this years World Rifle Shoot in Sweden. This competition is one of the most competitive of them all! David explains it as being the step above the Olympics! Only 24 people are accepted to enter and over 20k-30k competitors try every week to qualify. David is extremely excited and ready to get after it, bringing Gun Therapy and the Parkinson’s Shooter to the global stage. Training every day, firing over 100,000+ rounds a year, David is ready to take on the competition and hoping to land an ammo sponsor who can help him spread his Gun Therapy message and show the world, guns are not bad but actually useful tools for anyway. David is a man who refused to quit and instead chose to return fire on his diagnosis of Parkinson’s disease. Reclaiming his freedom and keeping himself as mobile and fit as possible, David doesn’t plan on retiring from competitions or shooting any time soon. Instead he only has bigger hopes and greater dreams! Dreamscape Foundation wants to wish David luck this August as he competes at the World Rifle Shoot in Sweden and hopes he shows the world what the Parkinson’s Shooter is all about! If you wish to follow and support David, please follow him on Instagram and Facebook.       « PreviousNext »