Drop Into MrsGothicc’s Fall Guys Charity Stream on May 16, 2021

Drop Into MrsGothicc’s Fall Guys Charity Stream on May 16, 2021

MrsGothicc’s Twitch handle may sound a little dark, but don’t let the name fool you. This non-profit streamer designed her channel with a bright mission in mind: to raise funds for charities. Dreamscape Foundation will be the beneficiary of her efforts in May as she launches a charity stream with a target goal of raising $500 for our mission.

MrsGothicc’s Humble Beginnings as a Gamer and a Streamer

MrsGothicc’s first console was a Nintendo 64, where she played classic titles like Donkey Kong 64, Legend of Zelda: Ocarina of Time, and Super Mario 64. Back then, gaming was a casual hobby that she engaged in off and on. However, when she bought an Xbox 360 to entertain herself in between her studies in college, it leveled up her love for gaming. She attributes this renewed passion to a game called Bioshock. It quickly became her favorite, sparking a long-term love affair with the franchise.

MrsGothicc entered into the streaming world in early 2020 as a way for her and her husband to have fun together during the global pandemic. With the world on lockdown, it became their shared hobby. The pair began with a simple setup, streaming directly from their Xbox One consoles to Microsoft’s now-retired platform, Mixer.

Through this experience, she quickly discovered that streaming wasn’t just about watching people play video games. It was about community, and the connections people formed over it.

“Meeting people through streaming is one of the biggest saving graces over the last year,” she said.

Using Her Streaming Channel as a Vehicle for Charity

After Mixer closed, MrsGothicc moved her channel over to Twitch where the vision and purpose for her channel began to take form.

“When I started to get into [streaming] more, I saw it as an opportunity to help people,” she said.

Prior to the pandemic, MrsGothicc actively volunteered with her local Ronald McDonald House Charity chapter, which helped to provide medical care and assistance to sick children and their families. However, health-related restrictions due to the pandemic put those effort on pause. Thus, she turned to streaming as a new avenue for giving back.

She set out to gain affiliation with Twitch in order to use her channel as a vehicle to raise funds for charity. Her goal was to upgrade her equipment and become a Twitch affiliate over the span of a year, but it happened much quicker. By December 2020, she achieved her objective.

Now she is a part of Sidequest, a team with more than 60 members ranging from newly affiliated streamers to seasoned streaming veterans. They conduct multiple charity events each month, both as a group and through individual efforts.

“It’s important to be a good ally – having a community that not only cares and supports others but also tries to do what they can to help those in need. Be the love and light we need in the world because that is what will make a difference.”

Join MrsGothicc on May 16 at 1:00PM EST to Raise Funds for Dreamscape Foundation

MrsGothicc will be holding a Fall Guys-themed charity stream benefitting Dreamscape Foundation’s mission on May 16, 2021. This 6-hour stream-a-thon will include multiple ways for you to earn prizes and interact with her via your donations:

The goal is to raise $500 for Dreamscape Foundation’s mission. Rewards for MrsGothicc’s community for achieving – or exceeding – these goals include a Dr. Thiccrespect E-Sport Stream (at $500 raised) or a stream where she cosplays as JarJar Blinks while playing Star Wars games (if $1,000 is raised). 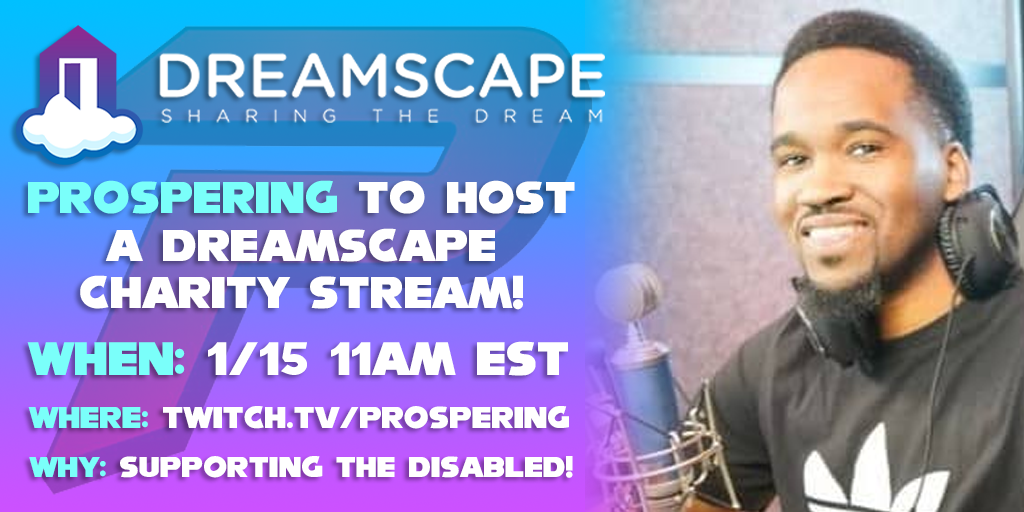 We have all heard the saying, find something you love to do and you will never have to work a day in your life. Unfortunately for most of us this dream is not a reality, but for Javante Anderson it is. Anderson, better known as Prospering, is a lifelong gamer who turned his passion into a successful career two and a half years ago.

Life is About Balance

Prospering recalled, “In the beginning you really got to buckle down and grow your brand, but also find that balance between educating [yourself], fitness, and eating well. In the gaming industry, or any industry, I believe self-care is extremely important.” Anderson’s positive outlook and don’t give up attitude, as well as his impressive gaming skills has all contributed to his success as a streamer.

The streamer has not only grabbed the attention of fellow gamers, but caught the eye of a very well known company. “I am still currently sponsored by DTS. They are like family to me,” Anderson explained. The company celebrated Prospering’s huge achievement of reaching 10,000 wins in a little game called Fortnite by gifting him a large custom made canvas displaying the gamer with his historic milestone.

In addition to Anderson’s colossal amount of wins, he holds the #1 Ranked Spot for PC Wins Worldwide in Fortnite. “Fortnite is just such a unique and beautiful game in all aspects. It does require a lot of time to put in to play to get a certain hand on it, but once you do put that little bit of time in it is such a beautiful game,” he explained. Prospering also currently holds the #1 Ranked Spot for PC DUO Wins on Fortnite.

Nothing Beats a Smile

If you ask the highly skilled gamer what his favorite part about streaming is you might be surprised by his answer. “My most favorite part is the moments I share with people. The smiles, the laughter, the very unique moments that bring joy to everyone, I love that the most,” Prospering described. This joy is apparent in every single one of his streams and makes Anderson the perfect candidate to host a Charity Stream.

For his second official Charity Stream, Prospering is teaming up with Dreamscape Foundation to raise money for individuals with sensory disabilities. He explains, “If I have ways to give back, I would like to take those opportunities just as much as I would to further myself.” Join Dreamscape Foundation and Prospering for an action-packed Charity Stream this Friday, January 15, starting at 11 am EST. In Anderson’s own words, “I am going to be playing a lot of Fortnite. If anyone else wants to join in, feel free to come get some games in.” 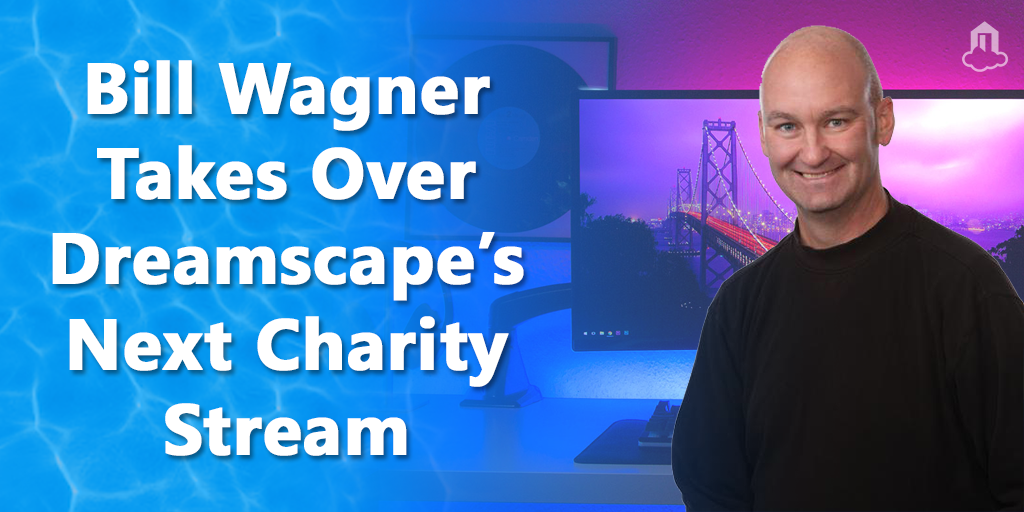 While Bill (AKA BillTheConquerer) is not new to the gaming world, he is however new to the world of Twitch. Bill has been streaming on Twitch for about 2 months now, and after only 4 days of streaming he was able to hit affiliate status. Which for those of you who are not as familiar with streaming, affiliate is a program within Twitch that helps streamers to get paid for their work. Bill has worked on 4 different startups in the gaming industry helping people make a career out of doing what they love. Using the skills he learned, he is able to help people better market their streams and turn it into a business that can actually turn them a profit they can support themselves off of.

Bill has been playing video games for years, but he does not consider himself a competitive gamer. He plays mostly for the joy of gaming. Bill says, people do not come to his stream to watch his skills, while he is a good gamer folks often come to socialize with him and ask him various questions about his stream or how to better their own stream. When asked what he enjoys most about streaming Bill says, he really enjoys the social aspect of streaming, and he appreciates the raw honesty of it all. The internet is a place where almost everything is either censored or filtered. It is nice to have a space where people can express emotion and interact with people in real time in a way that is unfiltered and unscripted. This kind of environment really allows you to see who people really are and how they react to situations that may arise.

An Effort to Support Dreamscape

This Saturday Bill has graciously offered to partner with us for another charity stream! Bill is looking forward to the charity stream partnership with Dreamscape as it’s a chance to give back to the community that has given him so much. He feels he has been very blessed in his life, and streaming has been such a great opportunity for him, so why not use it to give back! What better way to do so than to raise funds to give a disabled man the tools he needs to regain his independence and freedom. But Bill and the Dreamscape Foundation put their heads together to come up with a way to give back to Bill’s community! All donors will receive a number of thank you prizes and be entered into our raffle drawing for Amazon Gift Cards! Based on a donation tier, the prizes are as follows: (please note all prizes ship US only) 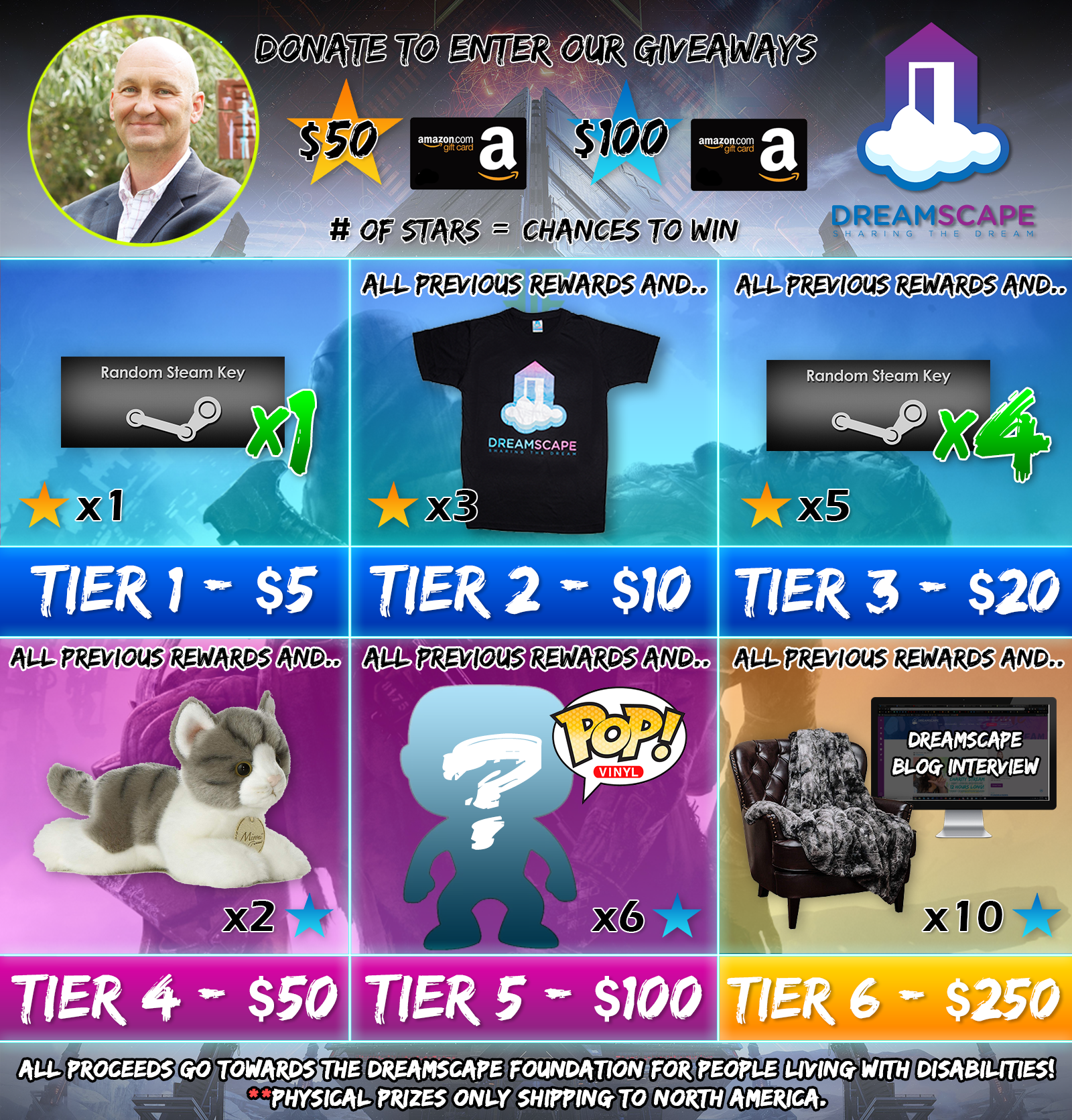 This is a man who truly cares for people. He goes above and beyond to give back and brighten the day of anyone he can! So much so, that prior to this stream, Bill partnered with another streamer named Byro who was working with a company call gamers outreach. Bryo had reached out to the gaming community looking for people to partner with her in her next charity stream event, and when Bill saw this he thought it would be a great opportunity to get his feet wet! Having one charity stream under his belt, Bill is excited to see how much the community can come together and help build one another up and support each other as a united front. Our event will take place Saturday March 7th from 9am PST and last about 8 hours. We look forward to seeing you there! To keep up with Bill and what’s next on his agenda, please give him a follow on Twitch, Twitter, and Youtube. « PreviousNext »