Sports have always played an important role in American culture. They have the power to unite the nation while teaching morality, ambition and integrity. American children are exposed to sports early on, and many kids begin specializing in a sport by five or six years old.  For an athlete to find success they are expected to look and act a certain way, and those who don’t are seen as underdogs. The best success stories involve breaking barriers and defying the odds. Just ask these famous former underdogs; Willie O’Ree, Shaquem Griffin, Rudy Ruettiger, Jim Abbott, Jeremy Lin, and hopefully one day, Kyle Hilliard.

Born nine and a half weeks premature, weighing only 4 pounds 8 ounces, left Kyle Hilliard with some developmental setbacks. “I was born with some nervous system and coordination issues, which resulted in me not being able to walk around two years old, so my mom took me out on the ice,” he recalled. “She took me ice skating to teach me natural balance, coordination, build up that leg strength, and before long I started ice skating. After I started ice skating, I learned how to walk. It’s kind of funny and went a little backwards.” From that point on, ice skating remained an important part of Hilliard’s therapy.

As Kyle continued to ice skate, his strength, coordination and balance kept improving. One day while at the ice rink, he saw kids playing ice hockey. Like any child would do next, he asked his mother if he could join them. Her answer was the first of many no’s that Hilliard would encounter throughout his sports career. She told me I had to get better at ice skating before I can start playing, so at four years old I begged her every single day to take me to the ice rink,” he shared. “Then at five years old, I finally started playing ice hockey, the sport that would become my passion in life.” 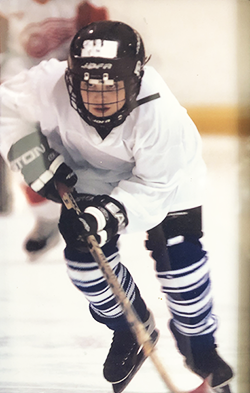 Love of the Game

Growing up, Kyle played in the local house league due to financial limitations, which meant he got one practice and one game a week for a little over half a year. When you compare that to players without financial restrictions there becomes a huge developmental gap. He explains, “their parents are paying 10 – 15 – $25,000 a year for their kids to get 48 game seasons, three-to-four practices a week, specialized coaching, scouting, tournaments and Canadian tournaments.” When Hilliard got to high school, he knew he didn’t receive the same proper direction and development as his competition, but he had the passion.

For Kyle’s freshman year of high school, he made the varsity hockey team, but he never played a game. “I sat on the bench, which just motivated me to keep working harder, overcome that skill gap, that development gap, overcome everything, just keep working harder,” he confessed. “Then sophomore year I finally got my shot on varsity, and junior and senior year I was an alternate captain on the team.” Not only did this left wing go from benchwarmer to captain, but his team went from a 3-18 season his freshman year to placing second in the championships his senior year.

After high school, Hilliard went to Seton Hall University and played for the American Collegiate Hockey Association his first year. As happy as he was to be playing hockey, he knew he had more to give and started looking for other ways to continue to evolve in the sport. Then he found the New Jersey Rockets Organization and saw they were about to have an open three-day tryout. “First day of tryouts coach tells me you’re not gonna make the team and tells me to go home,” he admitted. “I told him I know I’m not going to make the team. but just let me skate for the extra practice.”  Kyle not only returned the next day, but after tryouts ended the coach invited him to return for the third day. “I go back on the third day, and I made the team,” he proudly shared. “I went from being fourth line walk on to top six player on the team and captain.”

During his season with the New Jersey Rocket Organization, Hilliard spoke to scouts from the Calgary Flames and the Minnesota Wild. “They told me that they loved my skating speed and that I still have things to develop on, but, you know, skating speed was what I was marketing myself on,” he explained. Finally, after overcoming all of life’s setbacks it seemed like things were looking up. Then two crucial things happened. “The first thing was a small shoulder operation to fix a ligament that got torn,” Kyle shared. “Then the other thing was I had amassed 72 credits from Seton Hall University that ruined my chances of playing NCAA hockey because the eligibility cut off is 18 credits and you start losing playing years of eligibility.”

Age is Just a Number

Hilliard started playing ACHA hockey again once he healed from surgery and continued to play, develop, and improve over the next few years. “I had proven that I can overcome that skill gap, that I was getting up there, that I could do all these amazing things, but I just ran out of time because hockey has an age out at 21,” he told. “Everyone’s looking at me and saying you’re past 21, you’re too old, but hockey is a sport that should be for everyone no matter how old you are, where you came from, your background. It should be one of the sports where if you really want it, you should be able to make it happen.”

Put Your Money Where Your Mouth Is

Since first implementing the “Hockey is For Everyone” campaign in February of 2019, the National Hockey League has continued to use their global influence to drive positive social change and foster more inclusive communities. “They’re saying in their campaign that, you know, race, gender, sexual orientation, finance, and disabilities doesn’t matter; that the sport is for everyone. Well, here’s their chance to prove it. Give me a shot,” Kyle challenged. “I got the skating speed to compete with the best players in the world, just to give me a shot, and I can prove to them that I can.” Hilliard is doing all of this not just for himself, but to help pave the way for others. 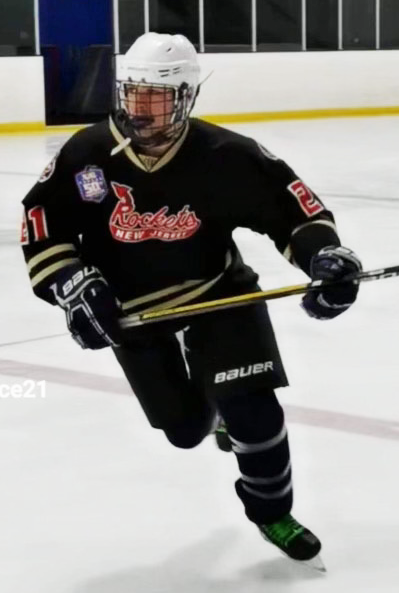 “It’s been everything. Hockey gave me the ability to walk. Hockey gave me drive and passion, so I just never quit,” Kyle admitted. For the past twenty years Hilliard has played hockey, but until recently he hadn’t sharing his talent in the social media world. There is one time lapse video in particular that really showcases his speed. “We did a skating video of me doing an all -star skating lap, and I did it in 14.16 seconds,” he boasted. “If you were to put that on the NHL speed skating competition, I would have come in fifth place and that’s all self-made.” You can see this video and many others by following Hilliard on his personal Instagram or TikTok.

Believe It, See It, Achieve It

Winners never quit and quitters never win.  In Kyle’s own words, “no matter your challenges you can you can overcome them and you can thrive,” he shared. “It might take a little more time, but it is possible.” The Kyle Hilliard Story is far from over. More committed than ever, Hilliard enlisted the help of world-renowned hockey coach, Vladi Kouroedov, and has been training with Kouroedov since February. With his improved skills, Kyle hopes to get the opportunity to try out for the ECHL next season. Hilliard’s story is a great reminder that with passion, work, and determination you can achieve anything. What do you want your story to say? « PreviousNext »