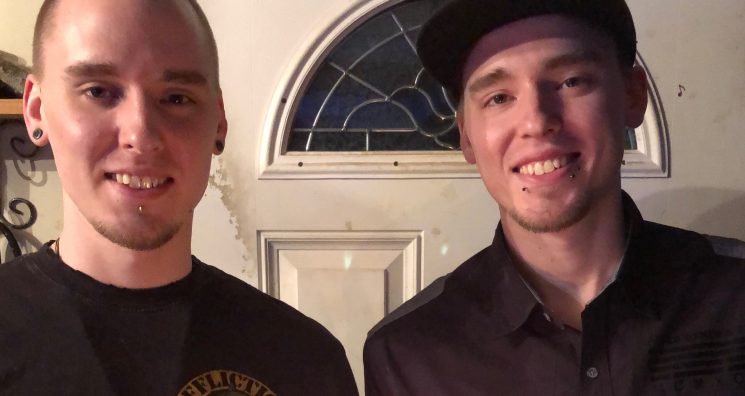 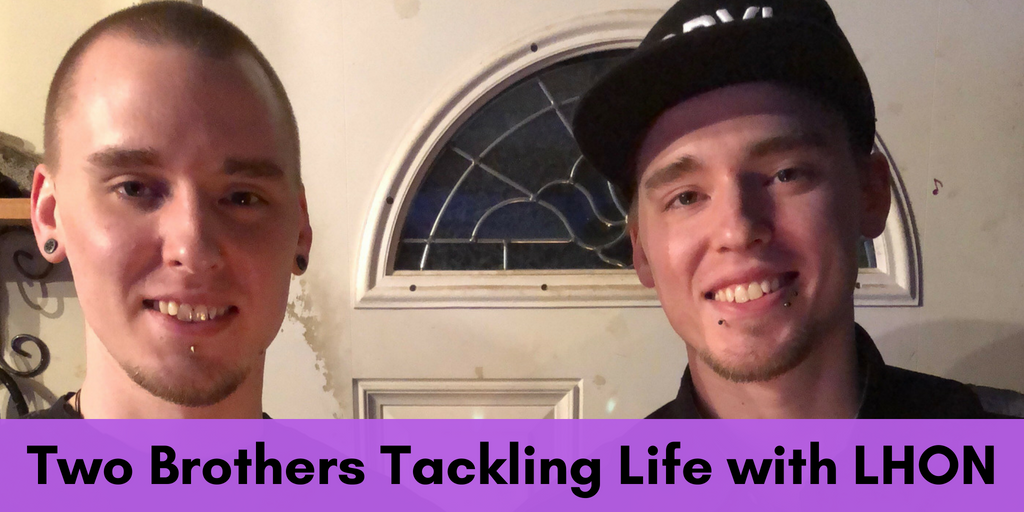 Leber Hereditary Optic Neuropathy. Commonly referred to as LHON, the disease is a mouthful to pronounce. On average, only 100 United States citizens are diagnosed per year, yet those 100 lives are drastically changed the moment symptoms start to unfold. Dreamscape Foundation Founder Joe Sehwani is one of the few to inherit it unexpectedly. His experience was a core influence in the creation of our non-profit. Yet he isn’t the only one who had to learn how to live life anew thanks to this rare disease. Kenny and Justin Jongsma are two young examples. For the last 7 years, they’ve been adapting to the limitations brought on by LHON from their home in New Jersey. The disease impacts one’s central vision to a degree that is often irreversible. Below is their story, told from their own perspective. From the moment of diagnosis to how they adapted to living with their disability, the 28-year-old twins share their insight on what life has been like with LHON.

The onset of symptoms came without notice. Justin was the first to experience them. He was 21 and already used to wearing glasses and contacts, so when the symptoms first began he simply thought it was time for a new prescription. “I went to the eye doctor and she said, ‘That’s not good’,” he recounted. “Of course, that’s not something you want to hear.” He booked additional appointments, but it wasn’t until he woke up one day and couldn’t see his television that he realized something was truly wrong. From that point on, his vision began to decline more rapidly. “I was very scared and very depressed for a while,” Justin confessed. “To wake up one day and not be able to do everything you love to do and are used to doing… I took it pretty rough.” Within a month or two, Kenny’s own symptoms followed. Together, they began searching for answers when they discovered that it was LHON, a hereditary disease carried by their mother. Their uncle had it, but neither of them had ever fathomed the disease would be passed on to them. “I started getting nervous,” Kenny said. “I didn’t know much about it. I had a lot of questions. How bad are my eyes going to get? When will it stop? Is it going to stop?” Their diagnosis did little to stave those fears, as the disease came with more questions than answers. Yet they had to press on and learn how to live with their newfound challenges, one step at a time.

Life changed drastically after Kenny and Justin lost their central vision. In many ways, they had to relearn how to navigate the world they had come to know so well. Their limited sight brought much of their lifestyle to a screeching halt as they tried to figure out what they could and could not do. “It pretty much changed every aspect of how we live,” Kenny explained. “I was working a different job back then where I was doing a little of paperwork and computer work. When I could no longer see what I was doing, I was forced to go on disability and quit my job. “It got to the point where I couldn’t drive anymore and do things like reading, video games, or watching TV. For a while, I was afraid to walk down the street because I might bump into somebody or run into a sign.” “Everything was definitely affected,” Justin agreed, “But I didn’t let [LHON] take control of everything. I refused to let it do that.” Determined, the twins took a step back and found ways to adapt. From identifying their limitations to relearning how to do the things they loved most, they carved a new way to live, work, and have fun along the way. “Our friends are understanding,” Kenny said. “They have no problem picking us up and dropping us off. Same goes for our coworkers. We get rides to work. As far as hobbies, I’m very into video games and that’s something that really changed. “But it was one of those things that I refused to get up. I found a way around it. It took some saving, but I bought myself a large screen TV. When I sit closer to it, I can see more of the details. I’m not as good as I used to be, but with practice, I can still enjoy it.” Both Justin and Kenny now work together at a local supermarket where they handle overnight stocking. Their boss, mindful of their strengths and limitations, provides them with responsibilities they can tackle with confidence. There are also many things made possible thanks to the accessibility provided through everyday technology. “In the beginning, I had this magnifier that helped a little bit, but it was only for reading so it was very limited,” Justin recalled. “Eventually, it got to the point that it didn’t help me anymore so I just use my phone.” Their iPhones offer multiple features, including zoom, voice-to-text, and Siri, to make everyday activities not only easier but possible. “As far as doing anything online, the iPad really helps with that,” Kenny elaborated. “I use the iPad Pro – the big one – and it’s really helpful. It has contrast options or inverts the colors if you need to. For me, the contrast really helps to see things a little better. We also use the magnifying option on our phones at work if we need to read something written in small print.” The brothers are also exploring a new piece of technology on the market called eSight, which are electronic glasses designed to make seeing easier for the legally blind. “It must have been hard for people dealing with this condition 20, 30 years ago when we didn’t have these things,” Kenny admitted, to which Justin quickly agreed. But technology wasn’t the only aspect that made life with LHON possible. The twins attribute much of their positive attitude, tenacity, and ability to embrace life to the unyielding support of their friends and family. “Everyone is willing to help us,” Kenny said. “They don’t show any sign of an issue. If we need or want to go somewhere, our parents are more than happy to take us. As far as friends, they’re more than willing to pick us up and drop us off or take us to wherever we’re hanging out. There’s definitely a ton of support there.” “Absolutely,” Justin agreed. “Almost everybody we ever talked to about it has been supportive of us. Even our boss helps us out.”

A Word of Hope for Others

Living with LHON is a challenge. One that both Justin and Kenny will admit isn’t always easy. Although they endure and overcome its challenges together, they’ve experienced both highs and lows along the way. In these moments, the twins find their optimism and inspiration in others. “Ever since I started going through this, I have had a humongous respect for anybody that has a handicap or disorder they have to go through in life,” Justin said. “Everything you go through takes a toll. To be strong enough to go on and deal with anything like that is very courageous. Seeing other people deal with these problems gave me courage and made me very positive. “Every day is a constant reminder that I can’t see anything, but I never let it bring me down anymore. I had that time in my life and it’s over.” Justin’s words, spoken with conviction, were shared by his brother. When asked what advice they would give to others in similar circumstances, they didn’t hold back. “Whether it’s this or any disability or negative thing you’re dealing with in life, don’t spiral down into depression. Don’t let it stop you,” Kenny stressed. “There may be things that your situation makes difficult. There may be things you may have to give up in certain situations. But you can’t spend the rest of your life wishing it could be different. If there’s nothing you can do about it, you have to find a way to push through it. “That’s what we’re doing. We’re doing the best we can with the hand that we were dealt and we’re not letting it bring us down.” “It’s a lot easier said than done,” Justin confessed. “So do your best to find support. Even if it’s just from one person, like a family, friend, or loved one, support is everything. That’s what got me and Kenny through a lot of stuff. If you don’t have anybody there, it makes it a lot darker and lonely. Support is what helped us.” Whatever your disability may be, Dreamscape Foundation encourages others to become rooted in both hope and support. For more information on support resources or how you can get involved in making life more accessible for those with disabilities, reach out to us.   « PreviousNext »