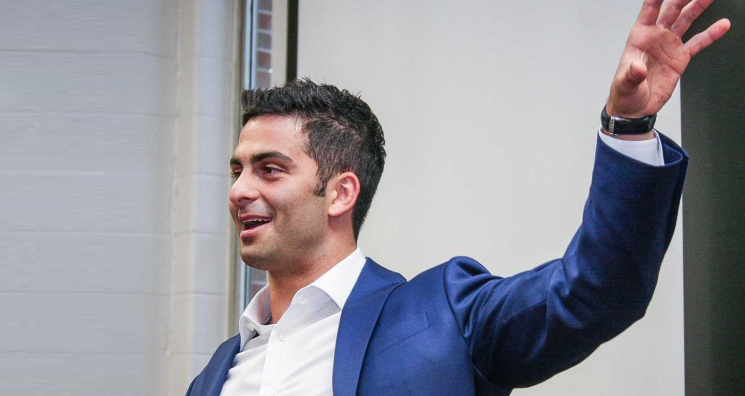 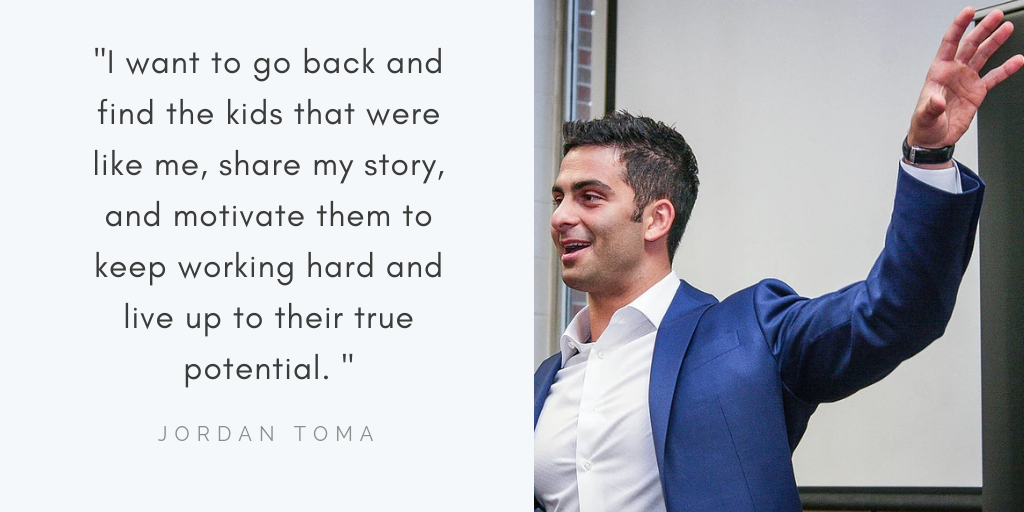 IEP. This acronym haunted Jordan Toma as he grew up. Three simple letters placed him in separate classes, away from the others. It stands for Individualized Education Program, and its designed for children who receive special education. This segregation told Toma at a young age he was different, and that difference seemed like a weight he would drag through life as he struggled to catch up with others. But Toma’s IEP wasn’t who he was. The moment he learned this, everything changed.

Who is Jordan Toma?

When you talk to Toma, his enthusiasm is downright contagious. His energy and optimism are packed into every word as he shares his testimony with others. Yet he wasn’t always this jovial. As a kid, Toma was diagnosed with a severe learning disability that made his academic path a challenge. Through special education, he was segregated into a special class with other kids who felt the weight of their differences as a mark upon their self-worth. “All I associated IEP with my whole life was that I wasn’t a good student; that I wasn’t that smart,” Toma said. “When you go through the system with a learning disability, you take on this label. Students are mean to you, you get separated into different classrooms, and I just remembered not feeling like the rest of the student body. I hated it. I hate the way I felt.” Through the years, the weight of Toma’s struggle, the way people viewed him, and the way he viewed himself snowballed in a negative way. He became extremely anxious, fearing a life of failure and frustration as he labeled his future as hopeless. With a 1.7 GPA in high school and SAT scores to match, college seemed impossible. He was denied from 15 different colleges, each one feeling like a nail into the coffin of his future. Then the unexpected happened. A letter came from Centenary University with a message he couldn’t believe. “You’ve been accepted.”

Discovering It’s Okay to Be Different

Toma was accepted to Centenary University as well as the Step Ahead program, which is a pre-college program for students with learning disabilities held over the summer. The program is meant to instill within these students the skills and resources to prepare them for success. At first, it was intimidating for Toma. He was terrified of failure. Yet when he found his courage to try, it sparked the turning of a new leaf. His mindset changed, planting the seeds for the person he always held the potential to become. “By using all the accommodations and people they had in place, I was able to maximize my academic success,” Toma explained. “For the first time in my life, I passed a test on my own, and all these things started happening that had never happened before. I finally felt like I was coming to life.”

A Taste of Success

As Toma began to taste success for the first time, he became dedicated to his personal growth and aspirations. As his confidence grew, so did his health, his personal relationships, and his academic skills. After he graduated the program with a 4.0 GPA and college with a 3.3 GPA, Toma began his own insurance company in Westfield, New Jersey. However, when he was called to speak to a class one way about his life journey, he realized just how hungry kids like him were for the hope his story offers. “I wanted to come back and say, ‘I went through this. I struggled. I was one of those students just like you that could have slipped through the cracks, but I put myself out there. There are programs in place and people who will help you along the way, so don’t give up.’” In August of 2017, Toma founded I’m Just a Kid with an IEP, LLC. Its purpose? To inspire those like him and to be the person he needed to hear from when he was younger. His goal is now to visit as many schools as possible in hopes to inspire others like himself.

At the heart of Toma’s story is this: you are no less human and no less worthy of what the world has to offer just because you have an IEP. With hard work, dreams are possible. This is the purpose behind Jordan Toma’s efforts. “I decided to accept that this is how I learn and that I had to change,” he said. “I can’t let [my IEP] control my life, so I began using it as an asset. If it takes me ten times longer to figure something out, I increased my work ethic. That drove me to where I am today and who I am. It was a lot of positive self-talk and a lot of hard work.” He tells his story because it shows that a label doesn’t have to define your future. This one man inspires others by illustrating the potential lying in wait inside of them. If your school or organization would like to book Jordan for an event, you can reach out to him directly at www.jordantoma.com. « PreviousNext »