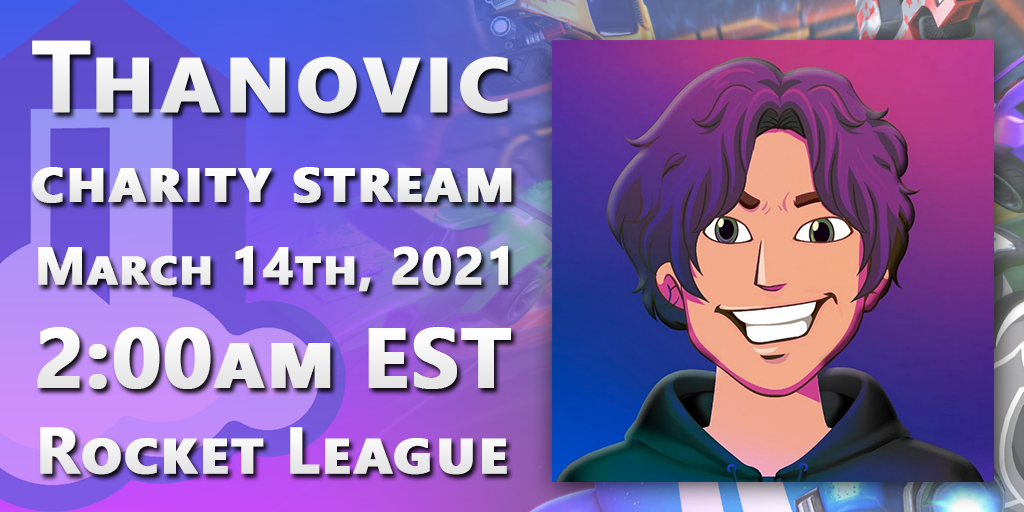 Everyone loves a good transformation story; rags to riches, weak to strong, tears to cheers. In the case of Ethan Robson, better known as Thanovic, he went from timid to talking. “Before I went to uni I was incredibly shy,” Robson recalled. “Even in my first year of uni, I remember I didn’t speak to anyone for the first six days of class and it was 9-5.” Thanovic went from being a shy introvert to having a large online following. Today he has 125,800 followers on Tiktok, 242,000 subscribers on YouTube, and 82,100 followers on Twitch (March 11, 2021). Not too bad for the quiet kid.

Before Robson became the well-known streamer he is today, he was just a regular college student enrolled in courses, working a part-time job, and playing video games. “I was in university for stage and screen acting, and I was working a job as a waiter, as all unemployed actors do,” he laughed. “I was playing [Rocket League] in my spare time.” Ethan started uploading videos to YouTube as something to do on the side while looking for acting jobs, and then his YouTube channel took off. Soon after his YouTube success, New Zealand went into lockdown. Thanovic decided to use this time to try and grow his following on two other very popular social medias, Twitch and Tiktok.

As the most downloaded app of 2020, TikTok is not a social media platform to underestimate. “I decided to get on TikTok because all the content creators I had spoken to said this is the best way for growth,” Thanovic told. “I was sitting on 200,000 subs on YouTube at that time, so I was like I think people will recognize the name on TikTok and people will follow because this is Thanovic I know from YouTube.” Ethan definitely had the right idea, and his followers on TikTok jumped from 4,000 to 100,000 in one month. Due to his success on TikTok, the content creator used the platform to promote his Twitch channel.

“There’s a very different thing between my YouTube and my Twitch,” Robson explained. “On YouTube it’s all about education and kind of helping, and on Twitch I don’t really want to be doing the same stuff.” While each platform serves a different purpose for the streamer, they both focus on his love for Rocket League (RL). Ironically enough, Thanovic was not always a fan of the game that he ultimately built his career around. “I didn’t originally like it, but then I got addicted because I was bad at it,” he admitted. “I really liked the high-skill ceiling and knowing I have a long way to go.”

Creating Your Own Path

Ethan’s dedication to improving his game has come full circle and made an additional lap. On YouTube, Thanovic’s channel is filled with informative gameplay, tips and tricks for improvement, and an opportunity for fellow RL players to ask questions. His channel caught the attention of one of the owners of GamersRdy, who asked if he was interested in building a RL course for the website. “He said you can do whatever you want on the course, but you are known as the tutorial guy, so I think it would be good to have you on board,” Robson recalled. “I ended up making a course from beginners to what was the top rank of the game; essentially furthering up on the stuff that I do on YouTube to help players of all ranks get to that next step.”

Join Dreamscape Foundation as we team up with Thanovic for his first ever charity stream this Sunday, March 14, at 2 am EST. This charity stream will provide people with disabilities the tools and resources they need to achieve independence, and improve their accessible access in their everyday life. “If all I have to do is stream to help out a charity, it feels wrong not to,” Ethan admitted. “I am looking forward to this one a lot.” Get ready for some fun, entertaining and competitive one-on-one games with the RL educator himself. It’s time to get your head in the game. « PreviousNext »