Glinda Who? The Charity Witch on Twitch is Here To Make Magic! 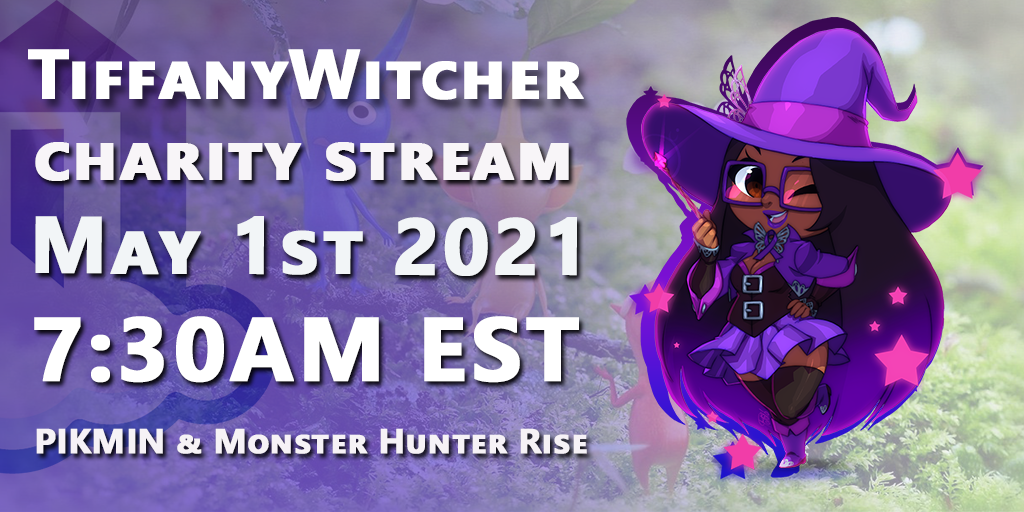 A parent’s job is never done; an old, yet timeless, saying. Growing up is full of valuable life lessons we learn from our parents. Not only is a parent a child’s first teacher, but in many ways also their last. Voice actor, charity streamer and cosplayer Tiffany Witcher credits her mother for molding her into the woman she is today. “She told me when I was very young that the moment you let someone’s negativity encourage you and you give up is the moment you fail,” Witcher shared. “She said you should never give up on something you want.” Myra, Tiffany’s mother, wanted her daughter to follow her passions regardless of her disability or anything else, and what better way than to share her own.

“We did this thing together called Pets on Wheels, where you take your dogs to places for people who are disabled, to hospitals and retirement homes, and things like that. You take your pets, and they basically get to touch a dog and be closer to an animal that they unfortunately don’t have the opportunity to be close to,” the voice actor explained. “At the time, I was very young, so I would just kind of just be off in the corner while she did her work, but as an adult I see like all the stuff that she’s done for so many amazing people and touched on so many people’s hearts.” Like many of us, Tiffany did not fully understand what her mother was doing until much later in her life, but when she did it changed her forever.

The Greatest Good Is What We Do For One Another

On April 11, 2017, Tiffany lost her mother due to Lupus, a disease that she shared with her mother. It wasn’t until Myra’s funeral that she really understood just how many people her mother touched. “She was a teacher, but she not only impacted students, she impacted people,” the charity streamer described. “There was someone that came from Pets on Wheels, and Girl Scouts came that she watched after when they were kids, who are now adults. It was just an amazing realization to see like so many people there celebrating her life just really touched me, honestly.”

As Tiffany continued coping with the death of her mother, she found herself going through some of her mom’s old things. Unbeknown to her, she found out that her mother was also active in charities. “I was like, man, she did so much for other people and gave so much of her time, so other people could have better. I want to do the same thing,” Witcher recalled. “At first it started out with charity tables I would set up at conventions for the Lupus Foundation, and educate about lupus because that’s the disease that I have and of course the disease that took my mother.”

“You do charity just because you just want to do some good and not get anything in return.” – Tiffany Witcher

During this time, Tiffany was already an active streamer on Twitch who openly talked about accessibility and chronic illness on her channel. Wanting to do more on the platform, she decided to do a charity stream to raise money for the Lupus Foundation. Once she discovered the potential of charity streaming, the Lupus Witch, also known as the Charity Witch on Twitch, was born. “I stopped doing the tables, and really started to dig into streaming to the point where I made a personal goal to do three charities a month, expect for the Month of May because that’s Lupus Awareness Month,” the Charity Witch on Twitch shared. “My anniversary is going to be in May; I started charity streaming May 2019, so my two-year anniversary is coming up.

This Is Just The Beginning

Two years down and forever to go. In just two years, Tiffany has become an active member of six amazing stream teams, raised over $26,000 for charities, and was featured on the front page of Twitch for Black History Month and will be featured for Global Accessibility Awareness Day. The Lupus Witch has accomplished so much in such a short period of time, and has big goals for the future. “I want to get partnered, so I can make a charity stream team of Vtubers from all different backgrounds, and come together to have Vtubing charity streams every month,” she explained. “It’s something that I really have been pushing towards these last couple months.”

Talking about mental health and physical health is an important part of being a charity streamer, but for Tiffany Witcher it is personal. “Another reason why I talk about a lot of chronic illnesses and accessibility in games is because I notice things for myself that need to be changed on the platform. I suffer from Lupus, Epilepsy, Rheumatoid Arthritis and Sjogren Syndrome,” she informed. “There’s so much that needs to be fought for on Twitch whether it’s the trans tag, warning tags, or just the safety and well-being of the viewers and the streamer.”

Join Us For A Wicked Good Time

Dreamscape is bewitched to announce that we are partnering with the Charity Witch on Twitch herself, Tiffany Witcher, for a 12-hour charity stream this Saturday, May 1, starting at 7:30 am EST to provide accessibility for those living with disabilities. “I’m doing this in memory of a woman that did this basically as long as I knew her as a kid,” the Charity Witch opened up.  “I’m doing this in her memory, fighting for her honor, and I know what I am doing is right. I know that deep down in my heart.” Prepare for fun, laughs, games and a few surprises from the witch herself. « PreviousNext »