Another Gamer Making a Difference in a Time of Need 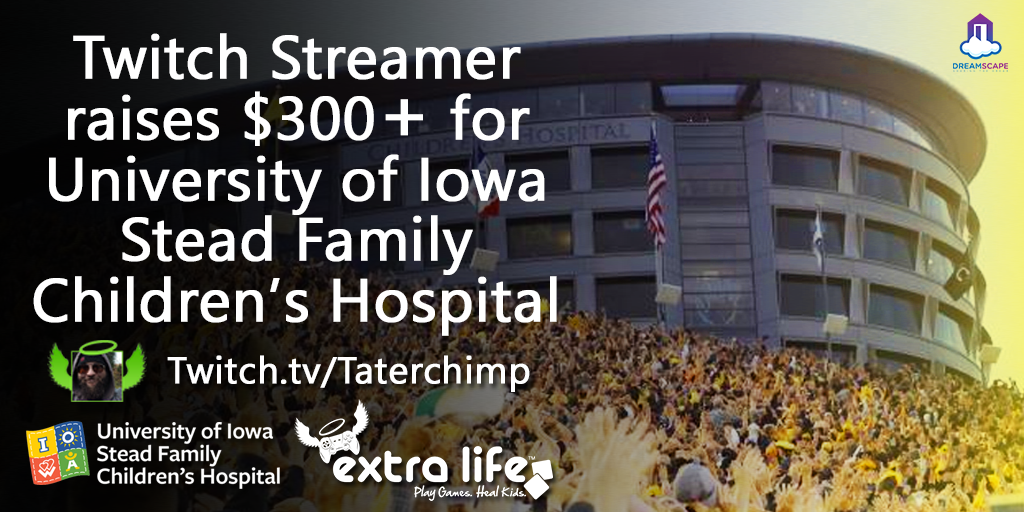 In the online realm of gaming and streaming, people all around the world connect, play, and chat every day.  So, with everything happening in the world, to them, there is still a place they can escape and find a bit of normalcy and hope. Some of these gamers, like Twitch Streamer Taterchimp, see it as much more. Rather than a place for people to escape to or socialize safely, Taterchimp took it upon himself to use it as an opportunity… An opportunity to make a difference and help those in need during this worldwide crisis.

A Chance to Make a Difference

On May 1st, Taterchimp set up a 13-hour Charity Stream, to raise money for The University of Iowa Stead Family Children’s Hospital. Setting his goal at $250, he made a promise to personally donate an additional $100 should the goal be surpassed and donations hit $500. Playing Final Fantasy XIII, he offered his viewing community a fun and exciting blind playthrough with some awesome incentives to go with it! Taking things to another level to ensure there was something for everyone to enjoy, he had donation incentives that let the viewers take control. All donors had the chance to change up the scene to his Pet Cam, pick his game character, mess with the music, or request a story or personal hand drawing to be done live! He even went as far to provide multiple game change incentives for those who may not have been fans of the game or wanted to mix it up and see something new.

He wanted everyone to feel welcome and use it as a chance to bring family and friends together in a fun, but safe way. In Taterchimp’s blog post announcing the stream, he had this to say, “Bring your family, bring your friends, and please bring random stories and jokes to help me keep my sanity.” Encouraging everyone to take part regardless of their ability to donate. In this great time of need, he wanted to support efforts helping save children, but also do his part in helping everyone. As we all know, staying in and staying safe is great, but not the easiest thing for everyone. Finding new ways to pass the time or keeping a routine can definitely be a struggle! That is why Taterchimp wanted this event to be for everyone because while he may have had a dedicated cause for the funds raised, he knew there were more ways to help people than just donating.

At the conclusion of the event, Taterchimp successfully surpassed his donation goal of $250 and currently stands at $365 raised! Even though the event itself has come to a close, you can still donate on Taterchimp’s Twitch Channel, as well as watch the recap on Extra Life. So, for anyone looking to give, it’s not too late to help!

An Extra Hand with Extra Life

Taterchimp may have orchestrated and hosted this event, but he had some support in doing so. The organization Extra Life has been helping gamers make a difference for years. Extra Life unites thousands of gamers around the world to play games in support of their local Children’s Miracle Network Hospital. They are constantly working with new gamers and you can keep up with them and what’s coming next on Facebook, Instagram, Twitter, and Youtube. Interested in being a part of one yourself? There is no requirement or minimum follower limit needed to bring your fundraising idea to them for help.

We want to give a big THANK YOU to Taterchimp and Extra Life for all of their hard work and selflessness! It is because of individuals and organizations like these, we are able to make such a difference to so many all over the world!