Accolonn Believes in Love, Not War For Dreamscape’s Charity Stream 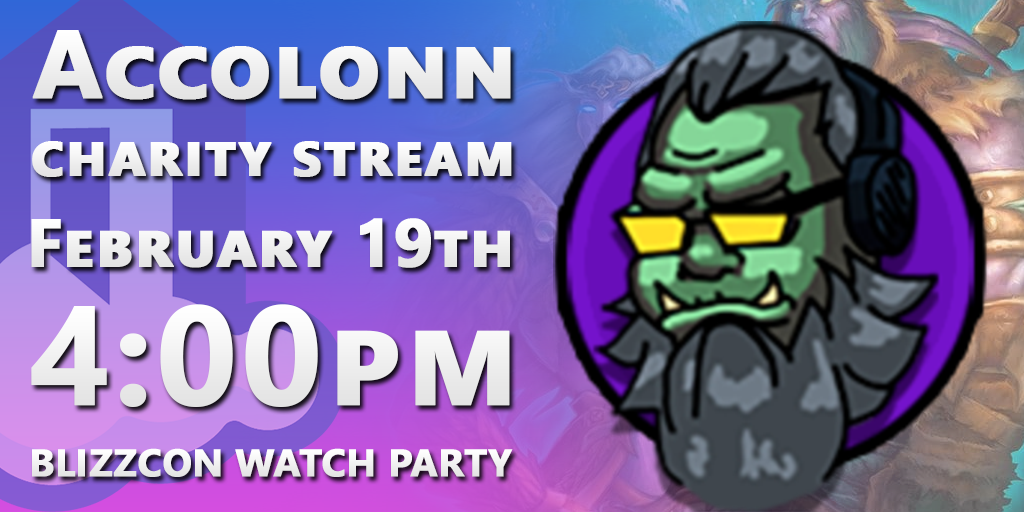 Sometimes we could all use a little escape. Whether that means getting on an airplane, binge watching Netflix or opening up a book is up to you. Since he was a child, Stephan Pistorius’ escape has come in the form of the fantasy world Azeroth. “There was something so magical about this world that you are in. It’s not our world, but a world of a magic that’s different,” he described. “And to a child’s imagination it was just unreal.” Pistorius’ fascination with the World of Warcraft (WoW) Universe has only grown stronger throughout the years. WoW has made living in fantasy a reality for Stephan, and we are all invited.

For Pistorius, better known as Accolonn, his dream of being an entertainer proved to be a lot easier said than done. When he first discovered YouTube and his own desire to create content, South Africa didn’t have the internet capability to support it. “I waited almost ten years, up to the age of thirty-one, to finally get internet that would allow me upload videos to YouTube,” Pistorius shared. “As soon as I could do it, I finally started making YouTube videos.” Accolonn finally had the creative freedom to entertain how he wanted. Although being a YouTuber was always the goal, being a streamer was not. Stephan enjoyed sharing his videos with his community, but the concept of being able to talk and hang out with others who had the same interests was more than appealing.

Just as it had taken years for South Africa to support YouTube, it was the same painful process for Twitch. This live streaming platform would allow Pistorius to take himself to the next level. “As soon as I knew it was possible, I thought let’s try our hand at this Twitch thing,” Accolonn recalled. “The more I started doing it, the more I started enjoying it and the more I started to realize my community enjoyed it.” Live streaming not only gave Stephan the power to transport himself and his viewers to Azeroth in real time, but to have open dialogue during the experience as well. The writers of WoW leave room in their world for players to speculate and expand upon, which I’m sure you can image leaves a lot up for discussion. “You are telling the story further than what the writers are at the time,” the streamer explained. “That’s why I love WoW.”

“When You Are Kind To Others, It Not Only Changes You, It Changes The World.” – Harold Kushner

Discussing the speculation and theories of WoW may be the main content of Pistorius’ channel, but that is not all it consists of. He also uses his platform to remind everyone of their humanity. “I think people are so serious these days and also people don’t really cut each other slack at all,” he stated. “We expect everyone to be perfect at all times, and if you make one mistake you get cancelled, the mob comes after you.” Accolonn has made sure that when someone comes to watch his stream that they know they can relax and kick their feet up. “You come there and you hang out with a friend,” Pistorius said. “You talk about the thing that you love, this world, and whatever theory is on the table for that day.” The focus of the stream is to do what you enjoy with people that you enjoy.

Life is Better When You’re Laughing

Before streaming, Accolonn doubted whether or not he would be able to entertain his viewers. Funny enough, in the end, his viewers entertain him as much as he does them. “I have never laughed as hard as I do at my chat. The things they say, the things they come up with,” he laughed.  “It is just ridiculously funny to me. They are my favorite part of it.” The Twitch Partner enjoys interacting with his community so much so that he worries about what would happen if his numbers get too high. “The higher the numbers, the harder it is to read chat because the chat starts going really fast and that would take all my enjoyment out of streaming,” he confessed.

Dreamscape Foundation is honored to team up with Accolonn for his first ever Charity Stream this Friday, February 18, starting at 4 pm EST to raise money to provide resources for individuals living with disabilities. “Based on everything we’ve seen, everything we’ve looked at, not only myself, but my community as well, believe in what you guys are doing,” he affirmed. Get ready to experience BlizzCon with the one, the only, Accolonn. Prepare for new cinematics, a grown man freaking out like a little kid, hanging out with friends and watching something you love. « PreviousNext »